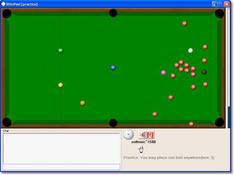 Billiards, although for many it is considered a hobby they play in the arcade, is a sport. Specifically those considered to be precision. Several attempts have been made to include it in Olympic sports, but this has not happened so far.

It is played since the time of the Egyptians but in Europe began to gain popularity in the fifteenth century.

Nowadays it is almost as common to play billiards on a real table as it is to play it on your computer in local mode or connected to the Internet. 8BallClub Billiards Online is a fantastic billiards game with which you can measure yourself online against players from all over the world.